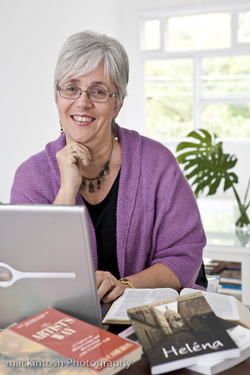 Image by mackintoshphotography.com.au
.A brief biography:
Jo-Anne grew up in Brisbane Australia and pursued her love of music throughout her school years. She holds an Arts degree with majors in modern languages from the University of Queensland, where she met her future husband, Lionel, then training for ministry. Four years later, the family moved to Sydney and then South Australia, eventually returning to Sydney, where they still live. Jo-Anne and Lionel have three children, Jane, Andrew and Tina, and four grandchildren.

Jo-Anne worked as a high school teacher, assistant editor, and office secretary, before undertaking further study. After obtaining a theology degree, she worked as part of a local church ministry team, before leaving to pursue her writing journey.

In 2013, her sixth novel, The Inheritance, a moving story of family secrets, forgiveness and faith, was released.

​Then on1st October 2016, Jo-Anne's second non-fiction work, ​Becoming Me: Finding my true self in God​, was released. For more information about this book, click here.

And on 31st December 2020, Jo-Anne's seventh novel, Down by the Water, set in south-east Queensland in the early 1900s, was released.

Why I write:
A few years ago, I was travelling with a friend in Turkey. I was at a turning point in my life, and was sitting reading my bible and praying one day, asking God to show me the way ahead.  Here is what I recorded in my journal on that occasion:

I then turned to my bible again, and the very next words I read were some from that same chapter (vs 18-20):  "Hear, you deaf: look, you blind, and see!  Who is blind but my servant, and deaf like the messenger I send? Who is blind like the one committed to me, blind like the servant of the Lord?  You have seen many things, but have paid no attention, your ears are open, but you hear nothing."

I immediately felt this was a gentle rebuke from God - a kind of ‘wake-up call', if you like. It was as if God were saying, almost with a sigh: Jo-Anne, you know I've already shown you what to do next! Go home and start writing!' And that is what I did..

It had long been a dream of mine to write, but I had always felt there were more important things to do, that it somehow was not quite a ‘legitimate' way to spend my time and energies. Now I think otherwise. Now I am convinced it is what God wants and has gifted me to do at this stage in my life.  More than that, I sense God is delighted to see me fulfilling more of the purpose for which I was created.

I hope and pray my books will make a difference in the lives of my readers. I hope and pray many will hear the heartbeat of God and allow their own hearts to be touched in the process.

PLEASE NOTE
​In 2020, Jo-Anne won an award for a short story she wrote, The Ring, in the Tabor College Stories of Life competition. To hear about this story and also listen to Jo-Anne talking on Vision Christian Radio about her own life journey, please click here.